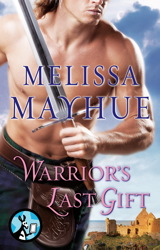 An enthralling eNovella that combines time-travel, the Scottish Highlands, and a touch of Norse mythology—linking the Daughter of the Glens series with the Warriors series spin-off.

When Jeanne MacGhie had nowhere to turn, Eymer Horvesson stepped in with an offer of marriage. He asked for only one favor in return…and now that he’s dead, Jeanne will stop at nothing to keep her promise to the young warrior—even though it means turning to the one man she swore she’d never speak to again.
Eric MacNicol never expected a cavalier refusal to wed would result in his losing the one thing he truly wanted in life. When a warrior’s final request forces him on a cross-country quest with the widow, he must battle his inner demons to make the right decision this time. Only one last gift from a fallen warrior can offer them both a second chance at true love….

~My Thoughts~
Melissa totally packed a punch of emotions in this novella. The characters were so believable you felt as if you were right there along with them on their journey.

It amazes me that the two of them even made it through alive :0)
From loosing half their supplies, to the cliff dangling,and the little boat breaking, truly a test in their well hidden feeling for each other.
Yet in the it seems Eymer knew best!

Now I know you are DYING to know what I'm taking about....

All About Melissa Mayhue! Former special ops agent CHASE NOBLE has been searching his whole life for the place where he belongs. As a descendant of Fae, he senses fate has more in store for him. And he will not rest until he discovers what his true purpose is. When he travels back in time to medieval Scotland, he discovers his mission is to save a beautiful woman—the same woman he is destined to be with.
CHRISTIANA MACDOWYLT possesses the gift of foresight. Prisoner of her evil half brother, Christiana has visions that show her that only one warrior can rescue her—a man she is mysteriously drawn to. The only problem is, he’s in the future. Now she must rely on the magic of a fairy to transport him to the past. And when Christiana finally meets Chase, the sparks between them set off a smoldering desire. But will the magic that brought them together also tear them apart?