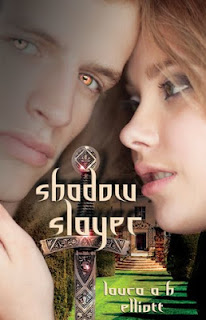 Shadows will do anything to become human.
You see their influence everyday.
You say things you don’t mean or do things that aren’t like you.
You look, different.
Friends you’ve known forever suddenly never call.

As a freshman, Roxie just wants to fit in which is impossible because she barely runs into her friends at her huge high school. Adrianne’s disappearance and Hayden’s attention rock Roxie’s world. But nothing rocks it like the most gorgeous guy at school, Drew. And nothing is more important to Roxie than astral projecting back to Planet Popular to solve the mystery of the map. But that changes when Drew invites Roxie to homecoming. Hayden warns her that something’s wrong. Why would a guy like Drew like Roxie anyway? Drew must want something. Hayden’s right. Drew is…different. Planet Popular was just the beginning. Part of a bigger world, the Shadow World. There’s a war brewing between the world of humans and the world of shadows. When the shadow invasion begins at Roxie’s high school, she’ll not only fight for her life but the lives of her family and friends, when she discovers she’s the Shadow Slayer, the one human who can save Earth from the shadow onslaught. But, Roxie can’t even kill a spider. Oh yeah, there’s an evil English teacher, an enchanted play, a sword of Sandonian steel, a homecoming of horrors, and seven magic words too.

~My Thoughts~
I had so much fun reading this story. It was like I was starting high school all over again.

This story has action, but has romance all bundle so sweetly.
It would seem that Roxie has it all in the beginning, then it all changes.Her friends aren't what they used to be and things just seem different, but the one semi-constant is....Drew


Roxie is one unique girl, I have to give kudos to her character. I never would have pulled off being a freshman and managed "slayer" too.
She is my favorite by far...the typical teenager in love.

Drew's character is charming and you can tell the author had put more of a mystery about him. He was more old fashion, not your usual sixteen year old, opened car doors even kept up conversations on history. As if that happens now days...LOL

The Battle begins and heads roll.......in the end though.......
an awesome Halloween read....Makes you double check all your friends to ensure they have their shadows...

~Where To Buy~
Amazon    Barnes and Noble   Book Depository

I love writing about enchanted road trips, shadow worlds, and alien romance while eating lots of popcorn. I live with my hubby and Oso, our aussie shepherd, in our tree house on the central California coast. After twenty-plus years as a freelance graphic designer/animator with clients including E! Entertainment Television and The Los Angeles Times, I crossed over into the world of publishing non-fiction and followed my heart to the world of fiction.

Link to some AWESOME TEASERS!!!!!!

~Quick side note for those who haven't read book one.....
13 On Halloween
it's currently FREE
Amazon-Kindle
Smashwords-All other versions~