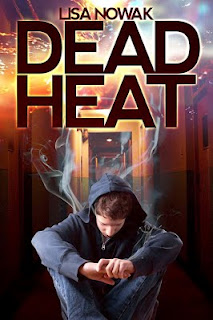 Alex is a machine whisperer. He can tell what’s wrong with a broken-down car with a touch. But his gift can’t save him from the brutality of his meth-addict father. For two years, Alex experienced kindness through Cole, his mentor. Now Cole’s dead, and the violence in Alex’s life is escalating.

When Cole reappears as a ghost, Alex clings to the tenuous link. Then he learns Cole might’ve sacrificed his chance to cross over. Jade, the first girl to look beyond Alex’s past, assures him Cole can reach the Other Side—if Alex escapes from his dad. But a previous terrifying attempt has convinced Alex it’s impossible. Unless he can find the courage to try, his friend may be earthbound forever.

In addition to being a YA author, Lisa Nowak is a retired amateur stock car racer, an accomplished cat whisperer, and a professional smartass. She writes coming-of-age books about kids in hard luck situations who learn to appreciate their own value after finding mentors who love them for who they are. She enjoys dark chocolate and stout beer and constantly works toward employing wei wu wei in her life, all the while realizing that the struggle itself is an oxymoron.

Lisa has no spare time, but if she did she’d use it to tend to her expansive perennial garden, watch medical dramas, take long walks after dark, and teach her cats to play poker. For those of you who might be wondering, she is not, and has never been, a diaper-wearing astronaut. She lives in Milwaukie, Oregon, with her husband, four feline companions, and two giant sequoias.


For a long time, I lay on that wet asphalt, wishing I was dead. It’s like I’m not even here, like the hurt’s so big I disappear in it. Something soft brushes my shoulder, near the base of my neck. Pain knifes through me, and I choke on a sob. Then I feel that touch again. I lurch up off the track to look around. Nothing.
I’m soaked, numb clear through, but the chill don’t do a thing to dull the fire of losing Cole. That wells up so big and powerful, I can’t hold it back. I scream as loud as I can, till I’m still yelling, but no sound comes out.
I can’t do this. No way can I go back to how things were. Didn’t I do all I could to make sure nothing like this would happen? All them lies I told, why couldn’t they keep him safe?
I shove the wet hair from my eyes and go get my bike. I rip out of the parking lot hard and fast, daring the cops to come after me, hoping I skid under the wheels of some car.
I got no idea where I’m going, but I wind up at Ivan’s Automotive, the shop where I work. Soon as I pull into the lot, the answer comes. My bike might not’ve done me in, but I know something that will.
I find a piston in the scrap bin outside and use it to bust the glass in the back door. When I get in, I turn on the office light, but leave the rest of the place dark. Don’t want nobody calling the cops before I finish this.
I pick the ’89 Taurus ’cause emission standards aren’t so strict for a car that old. Once I got the keys, I grab one of the hoses we use to vent exhaust from the shop. I stick one end on the tail pipe and put the key in the ignition so I can roll the window down a little. I snake the other end through till it’s resting on the passenger side floorboards. There’s a big gap, so I find some towels and cram ’em in to stop it up.
When I crank the engine, I have one thought of Momma, but the pain’s so big and deep it chases even that away. I close my eyes. For a second, I wonder if I’ll see Cole, or if it’ll just be over, but either way it don’t matter.
There’s this whir, and all four windows start going down. What the hell? I jab the master control to raise ’em. The second I take my finger off, they head south again. Are you kidding me? Real quick, I roll ’em up, kill the engine, and get out of the car to pull the fuse. Whatever’s going on, them windows can’t work if they don’t have no juice.
I get back in and crank the starter. The engine revs for just a second before it dies. I try again. The car sputters and stalls. One more shot, and this time it won’t run for nothing. Pissed, I twist the key and don’t let go until the starter sucks every bit of life out of the battery.
“Son of a bitch!” I slam my fist against the wheel, beating it again and again. Finally, I got nothing left. A sob grabs my throat and I slump forward, pain crashing down in waves that want to drown me.
Then something touches my shoulder. I jump and swing around. This time I see him, right beside me.
Cole. Only not Cole—he’s sorta sunk down into the seat a little, and the fabric shows right through him.
The shock stops my breath. I stare at him and he stares back, sadder than I ever seen him. That look is so damn Cole it rips a hole in me. I got no doubt that if he could, he’d take every bit of my pain and carry it himself.
When he puts his hand out, I feel that feather touch again.
“I’m sorry, Ace,” he says, “but I can’t let you do this.”