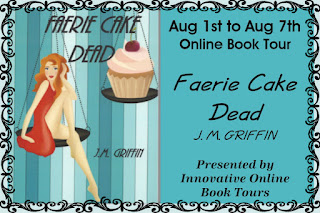 Tea, trust and trouble collide at Faerie Cake Junction. When divorcee, Luna Devere, owner of Faerie Cake Junction, meets general contractor, Devin Radford, chaos reigns. Devin instantly wreaks romantic havoc in Luna's life after she finds a corpse sitting in her tea shop as though awaiting service. The shop is surrounded by faeries who have befriended Luna. They know who left the dead man, but they aren't sharing. The sheriff is convinced Luna is daft and that she's the culprit. Devin wonders just how odd Luna is...even though he's drawn to her. And, Luna's ex-husband tries to incriminate her for reasons and purposes of his own. Will Luna survive? Only the faeries know.

I have to give credit where credit is due.....I didn't see it coming until the end!
Usually, I have it all figured out, but Ms. Griffin had to go and throw me for a loop..
WELL DONE!

I fell in love with Luna's character, she is head strong and even if some think she if a little off....so be it.
I was so glad that Devin walks into her life, we all need a little "Havoc" and man he could fix my basement any day.
The faeries are such an added delight...who wouldn't want a meadow full of faeries that come and talked to you??? Or Pixies that come to your rescue???
Personally, I thought for sure Thomas did it right down to the moment of the party, but then .....
Yeah, well I guess there's more to the story than meets the eyes....guess I need to go out back and ask the faeries ...After I make some cupcakes!!!!!!

The story itself is well put together and has the reader questioning who did what right down to the very end.

~Learn more about the Author~ 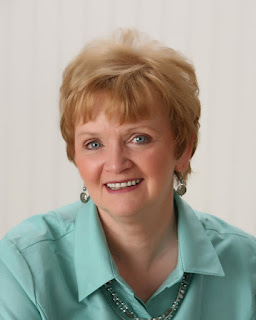 JM Griffin grew up in the Maine countryside. Inspired by the Nancy Drew mysteries, JM wrote her first story at age twelve.With 5 books written and more in the works, JM's first book in the Vinnie Esposito series published in February of 2009. The first and second Vinnie Esposito novels have been re-released through Lachesis Publishing. The third novel in the series, Dead Wrong, was released in ebook format in October 2010, and in paperback in April 2011. Stay tuned for more of the Vinnie Esposito series.In addition to the Esposito series, JM has written a mystery featuring faeries, pixies, murder, tea and cupcakes. Lyrical Press, Inc. presented the ebook on August 16th of 2010. The paper edition was released in June 2011 and is available at www.amazon.com. Murder on Spy Glass Lane, a novel filled with the antics of Sarah McDougall, a psychic artist, her Bassett hound Sparky, and their swashbuckling pirate-like neighbor was published as an ebook in January 2012. The paper version of this book will be available January 1, 2012 on http://tinyurl.com/82rs8s7. JM and her husband John reside with two crazy cats who rule the roost in New England. Their home is surrounded by a forest, a nearby reservoir and natures creatures.