The Fire of Dawn by V.V. Aku Blog Tour and Giveaway 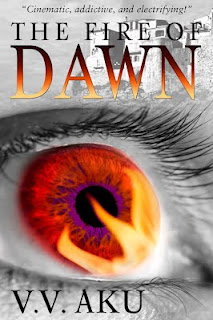 
Synopsis:
It’s the last day of the summer holiday in The Hague when Leah Koopmans’s carefree life as a teen is brutally flipped upside down. Her pale skin turns a dazzling gold, her senses heighten, and her muscles possess an uncanny strength. But with these exhilarating new powers comes a thirst that can only be quenched by one thing: human blood.


While her body craves for fresh victims and her heart drowns in guilt, she meets inhumanly handsome Max Machiavelli, who claims that Leah is immortal like him. Infatuation ignites into blistering passion when she joins his coven in Amsterdam. But as the mysteries shrouding her sudden change to immortality unravel, Leah quickly learns that her aversion to taking life isn’t the only thing that sets her apart from this group of herculean strangers.


From the picturesque canals of Amsterdam to Corsica’s limestone cliffs and the untamed Siberian wilderness; from first loves to fierce battles, The Fire of Dawn is an extraordinary tale packed with romance, betrayal, and bloodsucking suspense that will keep you on the edge of your seat till the very last page.

~My Review~
I found this book to have an interesting take on vampires. The story was outstanding. It was written wonderfully. The way it progressed allowed you to gain your information about each character as you read, instead of in one lump sum...very nice.
Such a memorable story of action, love...loss.....it was very hard to put down.
A definite read for all.

Author Bio
V.V. Aku has always believed in beautiful stories. She found the man of her dreams and her way in complex China, and wrote a fairytale of her own: The Fire of Dawn－a scintillating tale about strength, self-discovery, and a girl who dared to follow her heart.
Born and raised in The Netherlands, V.V. Aku (Veerle Ackerstaff) soon discovered that the world was a place worth exploring. After graduating high school, she set out to travel the globe until she finally touched down in China. On the border of Tibet she met Anzi Aku, a wild Black-Yi man who lives at the foot of the Himalayas. She has joined his clan and tries to find her place among the tribe and its shamans. When she’s not researching the clan’s mythology on vampires, she shamelessly gives in to the compulsion to write about the countless characters that haunt her dreams.

V.V. Aku is the author of The Fire of Dawn and Black Dusk. She has been the creator of stories since the age of three, and has a Post-Graduate Diploma in English Language Teaching to Adults from The University of Cambridge ESOL. After nearly a decade of working as an English language teacher and TEFL trainer in China, Thailand, The Netherlands, and the UK, she now devotes all her time to writing, her family, and practicing Kung Fu. The Fire of Dawn is her debut novel.

Want to find out more silly facts about me and my life in China. Join me on Facebook.com/VVAKU or read my blog on www.fireofdawn.com/1/feed

‘Where’s Leah?’ Max spun around. ‘She was right behind me!’
The sound of rotating blades thundered overhead as the blue helicopter lifted into view, banked north, and disappeared behind Livorno’s rooftops.
Max ran back toward the piazza. ‘Leah! Leah!’
The square was empty. The only evidence remaining of the struggle were the rusty pools of blood that smeared the cobblestones. The agents had been able to clear the scene in a matter of minutes.
‘Leah, where are you? Leah!’
‘She isn’t here,’ Pietro’s sad voice called from behind him.
‘No! Leah!’ Max frantically turned into the nearest street, panic cleaving into him. Soon, his steps became heavy as the horror of the situation dawned on him. ‘Leah!’
‘Max, she’s gone,’ Pietro called again, his voice as dead as the girl in his arms.
Max came to a halt, his expression twisted as if with the most excruciating pain. His knees buckled and he shakily slumped to the ground. Hope faded from his eyes. Pietro sat down beside him and together they stared into the empty distance. Minutes passed. Noises came from inside the surrounding houses. Livorno was waking up.
‘Andiamo,’ Pietro finally said, breaking the forlorn silence. ‘We cannot linger. The others must be informed.’
Max nodded, still in shock. ‘You’re right,’ he breathed, slowly getting back to his feet. ‘If we come back tonight, we might still be able to track those men.’ Determination returned behind his eyes. ‘Leah is still alive. I can feel it.’

I regained consciousness with a throbbing headache, in an unfamiliar room, facing a large mirror. The faint smell of rotten meat wafted through the tiny fissures in its frame. Another ashy fragrance hung in the air. It took me a minute to realize that it was coming from me. Large spotlights, their brightness stinging my eyes, hung from steel, grid-like frameworks on the gray ceiling and walls, which seemed to have been lined with lead. It was hot, as if the sun itself had descended from the heavens. I gasped shallow breaths, hardly able to inhale. A screaming agony slid down my windpipe with every draw.
With great effort, I managed to rotate my head. A small metal washbasin was to my right. A camera hung in the corner right above it. On my left a glassless, grated window decorated the otherwise bare wall. Raindrops streamed down the bars and ominous clouds darkened the afternoon sky outside. Cold iron pinched my wrists and I realized that my hands were bound behind the back of the metal chair I sat on. In terror I tried to squirm free and doing so sent an excruciating pain into my hands. But the feeling barely registered next to the rising panic that clogged by throat.
Horrifying images of Sam’s dead body swirled through my head, and Max’s deformed hands. Where is he? Did they get him too? Did they kill him? I forced my mind back to that last moment together in Livorno, but it was nearly impossible to see anything through the hot vapor that steamed my brain. The only memory that remained clear was the sharp zapping sound I had heard prior to waking up here.
I knew why things had gone so awry. Elena. The thought of her sent a jolt of fury through my entire body, which heated up in reflex.
Another bright light suddenly struck my face. It was blinding and disorienting. A fresh surge of weariness washed over me and my heat instantly subsided.
The man who had flipped the switch and was pointing this hellish inferno at me stepped out of the shadows and into the light, mercifully blocking me from the menacing glare. His wrinkled face was complacent and he was accompanied by the overbearing smell of rotten garbage and hair mousse, which glued his white, greasy hair to his scalp. His gray eyes were on me－devoid of emotion.
‘You must be hungry,’ he said.
There was something in his harsh words that repulsed me. His smug grin made me want to snap his neck. I struggled in my bonds, but my muscles didn’t work with me.
‘You want to take a bite out of me, don’t you?’
I gagged, smelling his foul breath. The idea of having his nauseating stench in my mouth churned my stomach. But he was right about one thing. I definitely wanted to take a bite at him.
He laughed and stepped out of the light. Once again it seared my face. I tried to turn away, but the light was everywhere. There was no escaping it. He edged toward me, holding up a syringe, grabbed a tuft of my hair, and yanked my head sideways. I screamed in agony as he brought his fist down on my neck and felt the needle penetrate my skin. Then there was only darkness again.