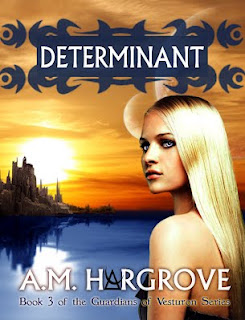 YA Paranormal/Sci Fi Romance
Title: Determinant, Book 3, The Guardians of Vesturon
Can be read as a STAND ALONE. Will have other 2 books in series if you would like to read them first.
Author: A.M. Hargrove

Synopsis:
:  January St. Davis, on her own since the age of sixteen and struggling to stay in college, thinks she’s scored in a major way when she lands a paid summer internship at the Centers for Disease Control and Prevention in Atlanta.  One evening, after working an especially long shift, a chance encounter with a group of mysterious men alters the course of her life.

Rykerian Yarrister, a Guardian of Vesturon with unearthly powers and impossibly gorgeous looks, finds himself at odds over the human female he recently saved from certain death.  When it seems he is on the verge of winning her over, she is ripped from his hands by a strange and powerful being, threatening to destroy her if his demands are not met.

Do Rykerian and the Guardians have the ability to meet this fierce barbarian’s ultimatums, or will January suffer a horrid demise?

I was lost in the events of the day and the amount of work I had and I was still nursing my wounded ego as I headed out of the lab.  As I made my way down the corridor, I noticed six men advancing toward me.
It wasn’t their actions I noticed so much or even the way they walked.  And though it was an oddity for them to even be here at all, it was their attire that captured my attention.  They were dressed identically, in an extreme fashion, much like members of a gang or secret society.  Large and muscular, they wore black vests and their bare arms were almost completely tattooed with tribal symbols of a sort.  Metal bands criss-crossed their chests and their legs were tightly encased in leather.  Knee high boots and black gloves finished off their ensembles.
As I neared them I felt my flesh tingle and the hairs on the back of my neck come to attention.  Gooseflesh erupted and alarms started clanging in my head.  I sucked in my breath and as I did, my eyes connected with the apparent leader.  I say this because he was in the front of the formation as they plodded along.
Time stood still as our eyes connected.  His were an uncanny shade, lavender with hints of indigo and specks of silver.  It was a hue I was unfamiliar with but they were intriguing and fascinating.  The alarms were still ringing in my ears and the air felt electrically charged around us.
“Halt!”
I turned into stone.  I couldn’t move a muscle.  He cocked his head as his eyes bore into mine.
“Breathe!”
I distinctly heard his command in my mind and I was helpless to disobey him.  I felt myself take a deep cleansing breath.  I questioned him with my eyes.  He flicked his head toward his men and they stepped back several feet.
“Who are you? Why are you here?”
I was confused by the demanding questions swirling in my brain but felt compelled to answer him.  I had never used mind reading to communicate, but I was sure he would hear my answer.
“I’m January St. Davis.  I’m here working on an internship for college credit.”
“You are human?” he asked with incredulity.
I wasn’t sure what he meant by that.  Why would he want to know if I was human?  What a ridiculous question!

~Check Out This Cool Author~ 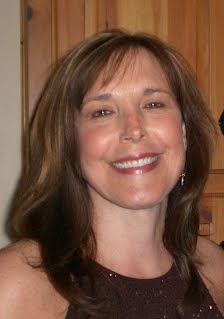 One day, on her way home from work as a sales manager, A. M. Hargrove, realized her life was on fast forward and if she didn't do something soon, it would quickly be too late to write that work of fiction she had been dreaming of her whole life.  So, she rolled down the passenger window of her fabulous (not) company car and tossed out her leather briefcase.  Luckily, the pedestrian in the direct line of fire was a dodgeball pro and had über quick reflexes enabling him to avoid getting bashed in the head.  Feeling a tad guilty about the near miss, A. M. made a speedy turn down a deserted side street before tossing her crummy, outdated piece-of-you-know-what lap top out the window.   She breathed a liberating sigh of relief, picked up her cell phone and hit #4 on her speed dial.
Boss:  Hello
A.M.:  Boss, is that you?
Boss:  Why yes, A. M., who else would be answering my phone?
A.M.:  Er... right.  Well, I'm calling to let you know you can pick up my luxury Ford Focus at Starbucks near the interstate.
Boss:  Why ever would I want to do that?
A.M.:  Because I quit!
A.M. hit the end button and speed dialed her husband.
A.M.:  Hi hubs, can you pick me up at Starbucks?
Hubs:  Sure... Having some car trouble?
A.M.:  Not at all.  I don't have a car to have trouble with because I just quit my job.
Hubs:  WHAT?!
A.M.:  It's time for a new career and I am going to be a very famous novelist.
So began A. M. Hargrove's career as a young adult paranormal romance author of self-published ebooks.  Her series, The Guardians of Vesturon, centers around a family of six siblings and is a mix of humor, mystery, suspense and of course, love.  Survival and Resurrection are her first and second full length novels in the series and Beginnings is the prequel novella.  Her third installment, Determinant, will be released on June 30, 2012.  (It didn’t happen exactly like that, but you get the idea!)