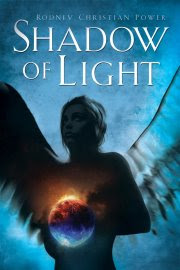 A junior angel’s impulsive decision to take over the body of 82-year-old Kathleen Kelly at the moment of her sudden passing is cause for heavenly concern, especially since Sarius begins his earthly tenure with a bang: by getting rid of the three hoodlums responsible for Mrs. Kelly’s death. Then he decides to move in with Brooklyn newspaper publisher Brooks Hennessey, his wife Rachael, his dog Reggie, and Arcturus, his foul-mouthed parrot. Over the next two days a series of wonderfully quirky incidents result from this intimate relationship, and great fun is had by all—until a messenger appears at the Hennesseys’s gate in the middle of the night to herald the end of the world. Ever met God? Want to find out what heaven is like? Even wonder what they do up there all day? Both heart-wrenching and hilarious, Shadow of Light will challenge any notions you may have about where science leaves off and miracles begin. Author Rod Power takes readers on a hilarious, hair-raising, suspenseful romp in this debut novel. A masterful tour-de-force with action that never lets up and delightfully quirky and engaging characters, Shadow of Light will keep you turning pages to the final, unexpected plot twist. If you’ve ever contemplated the end of the world and God’s purposes toward humankind, this is a novel that simply must not be missed.

Shadow of Light is a perfect blend of theology, science fiction and romance that leaves the reader hanging on by a thread wondering what antics Sarius (Mrs. Kelly) will think of next. Robert Power has so well defined his characters, including Mrs. Kelly that they fairly leap off the page.  Sarius, the mischievous junior angel with a huge heart and an even bigger mouth is just one of this story‘s many heroes.  All in all, this tale is a stirring novel of faith of a scale never seen before.

~Buy Your Copy~
Amazon Barnes and Noble
~More on the Author~
Website
Posted by Unknown at 2:00 AM