A CHRISTMAS CAROL 2: THE RETURN OF SCROOGE 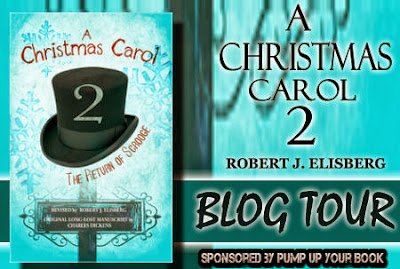 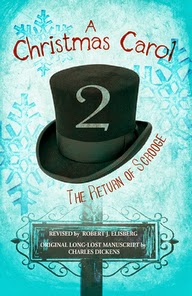 
It’s five years to the day after dear old Ebenezer Scrooge has passed away and left his thriving firm to his former clerk, Bob Cratchit. However, Bob’s overly-generous benevolence with lending and charity-giving has driven the company into the ground, on the verge of bankruptcy. And so the ghost of Scrooge returns one Christmas Eve to teach Cratchit the true meaning of money, with the help of visitations of three spirits – not all of whom are happy t be there.  (It is Christmas Eve, after all, and they have other plans.) Making the swirling journey through Christmases past, present, and yet-to-be all the more of a chaotic ride for Cratchit are the dozens of characters from other Dickens novels woven throughout the story, together for the first time. God bless them, most everyone.
And it’s all augmented with footnotes of letters between Mr. Dickens and his publisher, along with notes from Dickens’s own hand and scholarly research.  At least that’s what the editor tells us, though we’re a little skeptical of his honesty.

OMG!!! Really, I don't think I've laughed so much while reading a book in quite a long time.
The book was refreshing, fun, and down right humorous!
As the title implies this is the next part of our beloved Christmas Carol, per se.
It includes a bunch of Dicken's wonderful characters and should you not know those characters.....NO WORRIES!!!! The author includes little tidbits back into those characters.
So, basically if you've been hiding under a rock and have NEVER read or seen some form of A Christmas Carol, you can totally read this and ENJOY it!!!
I personally loved finding out what happens after Scrooge has his little break through and life changes for Crachit.  At times it was very eye opening...Cratchit and his soft heart....poor guy.
I think this would be a wonderful addition to anyone's collection...Go forth and READ it!!!!

Robert J. Elisberg has been a commentator and contributor to such publications as the Huffington Post, Los Angeles Times, Los Angeles Daily News, Los Angeles Magazine, C/NET and E! Online, and he served on the editorial board for the Writers Guild of America. He has contributed political writing to the anthology,Clued in on Politics, 3rd edition (CQ Press).
Among his other writing, Elisberg wrote the comic novella, A Christmas Carol 2: The Return of Scrooge,” which reached #2 on Amazon’s Hot List for Humor/Parody. His most recent novel is the swashbuckling adventure, The Wild Roses. He co-wrote a book on world travel. Currently, he writes a tech column for the Writers Guild of America, west. He also co-wrote the song, “Just One of the Girls” for the Showtime movie Wharf Rat, and wrote the book for the stage musicalRapunzel!.
Born in Chicago, he attended Northwestern University and received his MFA from UCLA, where he was twice awarded the Lucille Ball Award for comedy screenwriting. Not long afterwards, Elisberg sold his screenplay, Harry Warren of the Mounties. He was on staff of the international animated series, Flute Master, and co-wrote three of the Skateboy films based on it. He also co-wrote the independent film, Yard Sale. Most recently, he wrote an adventure screenplay for Callahan Filmworks.
You can visit Robert J. Elisberg’s website at www.elisbergindustries.com.