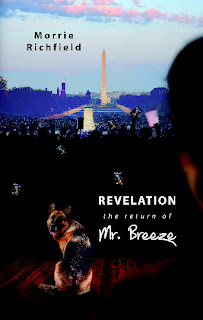 Mr. Breeze is back; so is Michael Ryan and Rover, the magical dog.
MR. BREEZE fans can rejoice. REVELATION, Morrie Richfield’s much-anticipated sequel to his novel MR. BREEZE, has arrived. Readers new to the strange but inspiring tale of a super being and his attempt to set mankind on a straight and moral path for its very survival can immerse themselves in what critics and readers alike are calling an “inspirational fantasy” with important lessons for all of us.
In MR. BREEZE, published in 2011, Richfield introduced readers to Zackary, aka Zack, aka Mr. Breeze, an ancient being who claimed to be mankind’s creator and who still exerts a powerful force on the human race and its very existence. Zack appeared on earth as a powerful man who did miraculous deeds. He chose journalist Michael Ryan to tell his story in a book that, he hoped, would show mankind how to stop its self-destructive ways and bring paradise on earth. With man’s fate hanging in the balance, Zack disappeared, leaving humans to their fate and Michael wondering what his role really is.
REVELATION moves the action two years into the future. The situation looks bleak. Mankind has slipped back into its old, destructive ways and Michael has become a dissolute recluse. There are people who view Michael as a savior and others who see him as a threat to be eliminated.
Along this strange trip, Michael meets new friends and reunites with old companions, the most significant of which is Rover, an abused dog whom Zack endowed with superpowers. Rover becomes Zack’s messenger to Michael, as Michael tries to get Zack’s original message out to the world:  If mankind doesn’t straighten out, he will destroy the human race.
Richfield plays down the description of REVELATION as an “inspirational fantasy.” He calls it a “self-help book, a textbook, a reality series on paper. It is what we see when we look in the mirror.”
If MR. BREEZE focused on Zack and his message, REVELATION focuses on Michael, following his struggle to understand his role in Zack’s master plan and to find his soul, Richfield says. “Michael’s final revelation is that we just don’t learn. Without the threat of destruction, we go back to our old ways. Our time is almost up and we need to do something. We need to show Mr. Breeze the human race deserves a chance to continue to exist.” 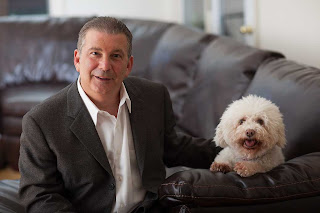 Morrie Richfield lives in Pennsylvania with his two sons, his dogs and his cat. He is working on his next novel, and he still dreams that someday the world will be a better place for all of us to live.
His latest book is the inspirational fantasy novel, Revelation: The Return of Mr. Breeze.
Visit his website at www.mrbreezethenovel.com.

Wednesday, May 2, 2012
Yes, it is me, Michael Ryan. I’m sure you remember me. After all, for a short time, I was about the most famous man in the world. For those of you who have forgotten, let me fill you in on what has happened in the two years since I last saw Zackary Breeze and Rover.
Of course you must remember Zack Breeze and Rover. Zack as he called himself is this time is our maker. He cured our diseases told us our religions are nothing but of our own making and turned a normal German Sheppard dog whose name is Rover into the second most powerful being on the planet. Let’s not forget that he used me to write his story and threatened our immediate destruction should I refuse.
I wrote the book that Zack asked me to write. It sold more copies than any book in history, and you all read it. I was oh so pleased with myself. I was rich, famous, and revered. You could not open a newspaper or magazine without seeing my name in it somewhere. It was my fifteen minutes of fame, so to speak.
For a time, there seemed to be hope in the world. The wars and fighting stopped—it was as if no one knew if the next shot fired would be the one that would bring the human race to an end. People seemed to like that I was somehow partly responsible for all of these remarkable things that had happened. I was admired by many, but what I did not know at the time was that I was hated by an equal number.
It seemed that once people heard Zack’s words, most of them stopped going to churches, synagogues, mosques, or any public place of worship. They prayed on their front yards and in alleys and at any time they felt the need. Only now, they prayed to Zack, and a somewhat zealous few even prayed to me.
For those fanatics, you see, I was the messenger of God. Through me, they thought they could find salvation, and, boy, did they try. They camped out on my street, in my yard, and even in my neighbors’ yards. They also built structures to honor me out of stuff from my trash and the trash of everyone else on the street. As you can probably imagine, my neighbors were not pleased, and neither was I. I was like a movie star; I couldn’t go out in public without paparazzi on my tail and people asking me to touch them. My fifteen minutes of fame had turned into twenty-four hours a day of hell.
Then the reaction from the religious community came. They finally realized that without worshippers and money, they would not survive. For them, Zack meant the end of their existence, and I became their target for retaliation.
“The devil comes to us in many forms” became their rallying cry, and as for me, I became the devil’s minion. I guess I couldn’t blame them for trying to bring their followers back, but I was astounded by how many people believed them. They quickly forgot what they had seen and what Zack had done. They even managed to convince the majority of the world that Zack cured all of their diseases just so he could fool them into thinking he was our maker.
Let’s also not forget how the pharmaceutical companies chimed in. After all, no more diseases meant no one needed medication, so no more business. They jumped right on that bandwagon and within a few months had almost everyone believing their miraculous cures were temporary. So back on the drugs they went, and back came the profits.
I suppose I should have expected there would be some reaction; after all, I always believed religion was nothing more than a very profitable business whose main currency was either hope or fear. If they could not get your money by making you believe in one, they would threaten you with the other. Just like any other business, they needed their customers to survive.
Suddenly, my home, my yard, and my street became the focal point for the battle between those who thought Zack was our savior and those who thought he was the devil. It was not a pretty sight. At first, there were just signs and lots of chanting, but then came the physical confrontations followed by the police in riot gear. I was a prisoner in my own house—that is, until someone decided to throw a Molotov cocktail through one of my windows and burn my house down.