An Interview with Adam and Eve

Today, I have the incredible honor of interviewing perhaps the most famous couple the world has ever known. They are a couple made famous in numerous books, religious tomes and testaments, including the Bible, and their legacy easily spans the centuries touching each and every one of us in ways we can only begin to imagine. The input of their genetics alone changed the entire direction of our species’ development. But beyond that, they changed our development both culturally and spiritually, and the effect of their presence is felt even today. The ironic part is, most of us know very little about the couple I'm going to introduce you to, our guests today, Adam and Eve.
Welcome.
Adam and Eve: Thank you. It's a pleasure to be here.
If you could change anything what would it be?
Adam: Pretty much everything. I mean, let's face it. The world, as you know it, is in the mess it's in because of us. Had we not defaulted your evolutionary level would be far superior today than what it is.
Eve: I think Adam is being far too hard on himself. I think he still feels that because of his betrayal to the covenant of Jhira thatthe blame for our default rests squarely on his shoulders. I keep telling him, that's not the case. We’re human and we made mistakes, and though we’d like to change things, it's never going to happen. We all have to live with the decisions we make.
What would you consider to be your biggest success with the Terran project?
Eve: You! I mean you as a people. You’re here, you’re growing and you’re surviving. That in itself speaks volumes.
Adam: Yes, I would have to agree with Eve. As a species you are struggling, but you've made it 40,000 years. I suppose we are most pleased by that.
In that respect how do you see our planet today? What are your concerns? What gives you hope?
Adam: I'm most concerned with your lack of compassion for one another. The most disconcerting signs is the violence I see. I keep hoping that the light will go on, and that one day you’ll realize the only way for your species to really succeed is by banding together. The Neanderthals understood that and that's why they survived for 200,000 years. But somehow you, the Cro-Magnon people, have pushed that characteristic aside. Perhaps it’s because so little of our genetics was infused into you—it’s hard to say.
You know, there are billions of life forms out there in space, and that's just in your corner of the universe. If you would just accept that it’s the differences in each and every one of you that makes you unique. You could be so much further down the road.
Eve: I’m most saddened by the treatment of woman on Earth. I mean, how can you think that you’re going to survive and grow when you suppress and subjugate half your population. It’s foolish. It’s like building a house with no roof and wondering why you get wet when it rains.
Tell us about the Garden.
Eve: It was a magnificent place. I don't think I can begin to describe just what a gorgeous place it was. The weather was temperate, the waters surrounding the Peninsula a deep blue, and oh, so clear. There was no pollution, and the seas were filled with fish. In fact, there was life everywhere surrounding the Peninsula. Of all the places that I wish I could re-create it would bethe Garden Peninsula of Eden.
Adam: Yes, Eve is correct about that. If there was anything right about our arrival on Earth, it was the Garden of Eden. Of all places I wish to revisit, it would be there.
Can you give us a glimpse of our future? Can we look forward to a new stage anytime soon in our physical evolution?
Adam: No. Any glimpse into your future would be unearned knowledge. And as far as any changes in your evolution, and I assume you mean from an outside source, I am not privy to that. However, the Neanderthal race had to wait 200,000 years before any infusion was conducted and you are nowhere close to that time frame. Also, you must realize that you are still evolving even as we speak. Let’s see what happens over the next 100,000 years before bringing in outside help. You might be surprised by what occurs naturally.

Adam, Eve, I would like to thank you for a wonderful interview. Meeting you has been a delight and far more than I could've ever have imagined, and I thank you from the bottom of my heart. And for our readers, I do hope you will take the time to pick up a copy of THE GARDEN, The Unauthorized Biography of Adam and Eve, available now at Amazon.com You won’t be disappointed. 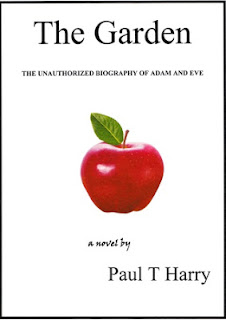 Nearly every religion and society in the world today begins with their story with Adam and Eve. And yet, this most basic story is couched in mysticism, myth, and vague detail. Did such a couple really exist? Were they the first man and woman on our planet–or is there more to the story?

For two hundred thousand years the Neanderthal race ruled Earth, then mysteriously, 40,000 years ago they disappeared forever leaving behind a new race of people, the Cro-Magnon. Why? What happened back then that changed our history?

The Garden of Eden, a perfect home built and designed for two people, until the serpent arrived. Who was the serpent? And what was he doing there in the first place? Is there a chance that the serpent is actually a reference to some hidden sexual transgression?

Imagine traveling billions of light years across space to settle an unknown world populated by primitive barbarians. Imagine being alone, just you and your spouse, the two of you in charge of an entire world with only your faith and your mission to guide you—and, of course, the devil waiting for that first fatal mistake.

Could you have done things better?

The Garden
Posted by Unknown at 2:00 AM