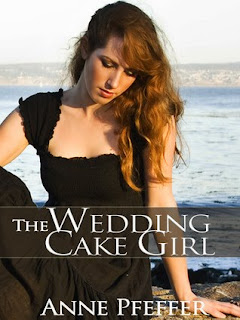 that she never has time for her own. An expert ocean diver and reluctant maker of

wedding cakes, she longs to leave roses and frosting behind to study oceanography.

cake business on her own.

No matter what Alex does, things only get worse for her. When she saves a man's life

while scuba diving and becomes the local hero, Mom's angry with Alex for going diving

at all. Mom discourages Alex's new friendship with Jeremy, a fun and insanely wealthy

boy who happens to have a secret. Then, Alex's best friend, Zack, a hunky island guy,

starts to take an interest in her as well. The problem is, he's dating another girl.

If she doesn't do something fast, Alex will spend her life making wedding cakes and be

buried in her "Sue's Wedding Cakery" apron with a spatula in her hand.

adventures, a family of billionaires, and lots and lots of buttercream. The book is Alex's

journey toward not only finding love, but learning how to step forward and take control of
her own life, a rite of passage that faces all young readers.

I wished I could of connected with the main character, but I just couldn't.
No, matter how many extra side stories that were brought in with Zack, Jeremy, Lester and even Chris...I just found Alex...... ANNOYING!!!!

I mean, the girl is turning eighteen!!!!
She can't talk to her mother, has to wake her mother up in the morning, has to basically do everything for her mother....You would think it's a nursing home!
It's takes her mom burning down a good part of the house for her mother to wake up and that wasn't until half way through the book!!!

I honestly don't know one teenager that wouldn't rebel.

I guess the end was truly the irony of the whole story....
her part-time job.

~About the Author~
Anne Pfeffer lives in Los Angeles near a large rotating neon chicken head with her
daughter and her dachshund Taco.
WEBSITE TWITTER


Someone with a whimsical imagination must have named the streets in Paradise. I head down Cinnamon Street to Carousel Avenue and turn left. It takes me all of one minute to get to Dizzy's Dive. Fishnets full of carefully preserved sea life cover the walls. Amidst the motionless crabs and swordfish, a soccer game blares from ten TVs. Brazil's playing Italy.
I squeeze my way through the tables. Zack's already sitting at the counter. Technically, since Dizzy's is a full-fledged liquor-slinging establishment, Zack and I are not allowed on the premises. But seeing as how Dizzy Malone is Zack's uncle, and Spike Malone, Zack's dad, is Chief of Police, there's no one to turn us in or arrest us. Zack and I have been hanging at Dizzy's since we were little, slugging down sodas and sitting near Dizzy at the bar, where he could keep an eye on us.
Zack listens to the person beside him, grinning broadly, his smile white against his tan. I love the way he's always himself, always calm and centered. A couple of girls walk by, checking him out, but he's waving to me.
It's okay if Zack's with Rosie, I try to convince myself. After all, I was the one who stupidly said it was better to be just friends.
Three months ago, Zack and I went mountain biking and stopped to rest on a hillside. I lay in a patch of sun with my eyes closed, while Zack walked around nearby. I heard him rustling in the grass, but didn't know what he was doing until I sat up, opened my eyes, and found him holding out a bunch of wildflowers. To me.
I leaned forward, admiring the island poppies and Arroyo lupine in his hand. "The flowers are great this spring, with all the rain we've gotten!" Then I looked up.
He had a half-embarrassed, half-determined expression on his face. "They're for you," he said.
"Oh!" In shock, I took them and sat there, looking down at them, not knowing what to say.
"I thought that maybe I should ask you out on a date. That is," he added, "if you're interested." He put on this "just-kidding" expression that masked the shy and serious Zack underneath and gave him an escape route if needed.
But the word "date" meant one thing: my mother and her men. I would never live in that world or let it touch what I had with Zack.
"I don't do dates!" The words flew out of me. I scrambled to my feet, the flowers falling from my hand. "Your friendship means too much to me."
"Yeah, I know, me too," he said, suddenly busy brushing off his shorts with angry little strokes.
"Zack, I...." I knew I'd hurt him, but I didn't know how to undo what I'd done. "Now I've dropped your flowers!" I wailed, trying to pick them up out of the long grass.
"Don't worry about it." He stalked off toward his mountain bike.
"Wait!"
"Forget it." He asked Rosie out the very next day.
I haven't been able to fix my mistake. We're still friends and diving partners, but it's not the same.