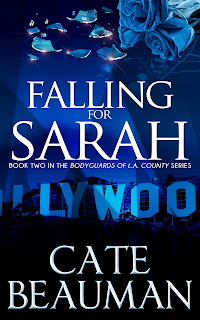 Widow Sarah Johnson struggled to pick up the pieces after her life was ripped apart. After two years of grieving, she’s found contentment in her thriving business as photographer to Hollywood’s A-list and in raising her angel-faced daughter, Kylee... until bodyguard and long-time friend Ethan Cooke changes everything with a searing moonlight kiss.

Sarah’s world turns upside down as she struggles with her unexpected attraction to Ethan and the guilt of betraying her husband’s memory. But when blue roses and disturbing notes start appearing on her doorstep, she has no choice but to lean on Ethan as he fights to save her from a stalker that won’t stop until he has what he prizes most.

Thoughts
There are so many words that come to mind after reading this...WOW, AMAZING, WHOLLY BOOGERS!
Cate Beauman has totally found a follower in me. Her writing and characters are supreme.

This story although starting kinda sad with Jake's death, goes zero to sixty from there. A creepy, insane , psycho thrown in with HOT manly men always make for an awesome ride.

Ethan is definitely my favorite character. Aside from being this hottie with muscles (and money...lol), he's bound by love and honor. That says a lot about a man. He picks up the pieces and then some, grant you he can be a totally dummy at times....he is a guy.

As for dear sweet Sarah, once she worked through all her issues she turn out to be one pretty cool chick. Although, at times I wanted to smack her upside the head for various reasons...if only she would stop over thinking things...LOL

Ms. Beauman did an excellent job with Ethan and Sarah as a couple/non-couple...you'd almost believe it in reality!

Serious, after reading this I don't want to see a blue rose ever!!
Zeke is just one flipping NUT CASE!
I was following along really good and then bam...he goes and changes things up on you. I mean really and no it's not his fault he changes...oh no...it's all Sarah's. She's the one...CREEPY!
A sick craving...but the man has to practice before he gets to her. One woman after another after another.....

For a story that at first glace you would think it just cut and dry....you'd be  passing once heck of a read up.
This story has love, murder, a PSYCHO and more turns then you can handle! 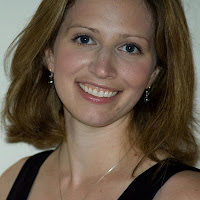 Hello BJ! Thank you so much for this wonderful opportunity to share Falling for Sarah, Book Two in The Bodyguards of L.A. County Series, with everyone.
While writing Morgan’s Hunter, the first novel in The Bodyguards series, I knew I had to tell Ethan and Sarah’s story next, but I didn’t know where to take them. Every good piece of writing is centered around great characters, a strong plotline and gobs and gobs of conflict. I had my characters, but the plotline and conflicts were still iffy until everything changed with a porch beam.

Yes, you read that right.  I’m addicted to Crime Television and psychology in general.  Late one evening, I had finished watching a particularly disturbing documentary on serial killers.  I had the ‘spooks’ and a major need for a glass of water.  I went out to the kitchen and turned on the faucet and freaked myself out when I caught site of our porch beam in the window.  For a moment, I thought someone was standing there peaking in.  Of course, I laughed at myself, shook my head, and got my glass of water, but my imagination started churning.  I asked myself, ‘what would it be like to look up and see someone in your window that didn’t belong? ‘What would it feel like to know someone was constantly watching?’  The next day I started my research on the inner workings of a true sociopath. Falling for Sarah came together quickly after that!

I currently live in Tennessee with my husband, two boys, and our St. Bernard, Bear. I recently resigned from my day job to concentrate on this thing I refer to as ‘My Dream Come True’ career!

I’m a pretty lucky girl; one day I woke up and my entire life changed. I saw the light, so to speak, and decided I was going to be a writer. Now, two years later, I’m working on the fourth novel in my best selling romantic suspense series, The Bodyguards Of L.A. County.
Morgan's Hunter (Book 1) Falling For Sarah (Book 2) Hailey's Truth (Book 3)
WEBSITE FACEBOOK GOODREADS AMAZON

Music is a huge part of my writing process. I typically listen to Pandora or YouTube and compile a collection of songs that I feel represent my characters or the situations they face as the novel unfolds. It’s a rare occasion that my creativity demands quiet (And that’s a good thing. I’m a mother of two boys. Quiet doesn’t happen in my house.). Here are a few of the songs that ‘spoke’ to me while I created Ethan and Sarah’s story!

The soundtrack, of sorts, for Falling for Sarah:

************
Sarah lay Kylee in her crib, covered her with a light blanket. Her daughter slept soundly in the center of the mattress, unaware that their lives were forever changed. She stared at the photograph of Jake hanging on the wall above the crib. She had taken the picture the day before he left to finish his deployment, before they were aware they’d made Kylee. His big, cheesy grin and smiling brown eyes filled the frame. Oh God, Jake. You’re gone. How can you be gone? I need you. I can’t do this by myself.
The dredges of shocked disbelief were melting away. Panic and dread quickly took their place. How was she going to live without him? Sarah glanced down at Kylee again as a thought circled through her mind. It brought such crushing pain she could hardly breathe. They would never meet. Jake would never touch the daughter he had helped create. Kylee would be robbed of ever knowing her father’s love.
Jake’s deep, infectious laugh echoed in her head and Sarah buckled. She would never hear it again. He would never kiss her or hold her again. Her breath shuddered in and out.
Ethan’s hands rested on her shoulders and she flinched. He turned her toward him. She stared into his eyes, saw the grief settled there, and a tear rolled down her cheek. “Tell me this isn’t real, Ethan. Please tell me this isn’t real,” she said on a sob.
He pulled her into his arms, holding her tight. “Come here.” He picked her up, sat with her in the rocking chair. Her long legs hung over the side, just skimming the floor as the chair swayed back and forth. Ethan cradled her close to his chest.
Finding comfort in the arms of her friend, Sarah wept as Ethan’s hand ran through her damp hair. “He’s really gone. I can’t believe he’s really gone.”
He lifted her chin as he spoke, choking on his own sorrow. “I’m making a promise to you right now, Sarah. You’ll never be alone through this. I’ll be here for you every step of the way, for as long as you need me.”
“I’ll always need you.”
“Then I’ll always be here.” He rested her head against his chest again as their tears fell, mixing together on the hands they held clutched together.